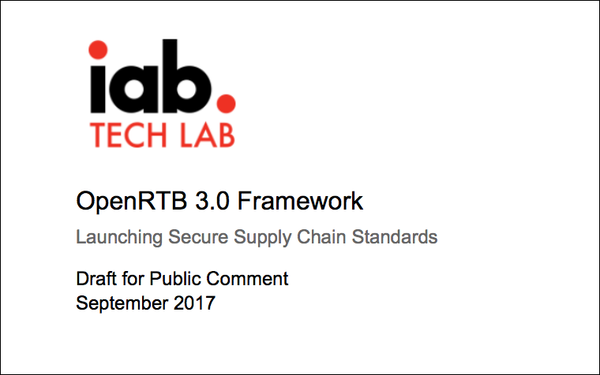 For 2017, Digital advertising industry have developed a lot  by programmatic buying system.

In complex and diverse ad supply chain, you can not only make more profit opportunities, but also get more danger for ad frauds easily. And then, It sometimes has made Digital advertising industry get lost their reliability from advertiser, publishers and users.

That’s why, there are 3 key words have been globally issued for this year ‘Viewability’, ‘Transparency’ and ‘Ad blocking’ on digital advertising revenue and UX.

To solve those kind of issues, among Ad-Tech companies, there have been made some solutions like Ads.txt. And  the IAB(Interactive Advertising Bureau) announced that they are going to launch a Open RTB 3.0 in this september in LA. They briefly introduced it as a framework version and they said “it will heighten trust in the security of the automated advertising supply chain by giving buyers more transparency during bid process. It also integrate recent technology advancements like Ads.txt to improve automated buying and selling for all stakeholders”

First of all, what is the Open RTB?

The Open RTB is an interface which is for Real Time Bidding between advertiser and publisher.
As time goes by, the more diverse players(AdNetwork, AdExchange) joined the market, the more numerous ad exchanges happened. At this time, all of players needed to adjust every single interface for individual ad exchanges.

To meet enormous ad exchanges, however, it was very inconvenient to make different interface per each ad exchanges. That’s why Big players from each buy(DataXu, Fiksu and [X+1]) and sell(Nexage, Pubmatic and Jumptap) side  decided to make a standardized interface protocol called Open RTB in February 2011.

After a positive response from the industry, IAB(Interactive Advertising Bureau) adopted it as a standard interface in January 2012. And it has been developed constantly.

Especially, the Open RTB 3.0 which has been released as a framework in this september has updated focusing on meeting the market’s demand for security, transparency, authentication and trust in programmatic advertising.

Three major changes are being proposed :

The Open RTB has been essential protocol in digital advertising industry. Because, when Open RTB was updated, they always reflected the changing trend of ad-tech. It means that it is possible to cooperate with global digital marketing companies stably through the  Open RTB.

By providing a standardized interface for digital advertising, Open RTB has led a transparency of ad exchanges and expansion of usability based on stability.